On May 13, 2009, Mr. Maxime Verhagen, Minister of Foreign Affairs of the Netherlands, Mr. Johannes Gerardus van Vloten Dissevelt, Netherlands Ambassador to Qatar, and other members visited the Pearl GTL project site, which is under construction in Qatar. Pearl GTL is being developed by Qatar Petroleum and Shell.

Because of its scale, the Pearl GTL project was divided into eight packages for order placement. Out of the eight packages, the Liquids Processing Unit (LPU) was awarded to and is being constructed successfully by the Toyo-Hyundai Consortium (THC), composed of Toyo Engineering Corporation and Hyundai Engineering and Construction Co., Ltd., Korea. The LPU block was chosen as the place to be visited by the Netherlands foreign affairs party because it was considered representing the eight packages.

At the site, the Minister asked questions about the progress of the project, combination of TOYO (Japan) and Hyundai (Korea), and approach to securing safety etc.. The visitors seemed to be strongly impressed with the project leadership and the THC’s construction efforts and way of work focused on safety. 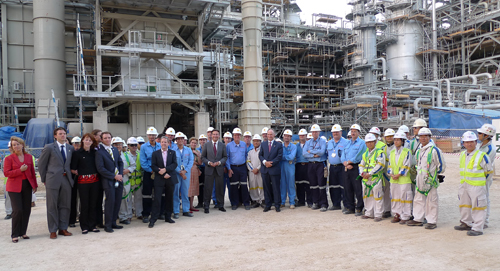 If you have any questions, please click here.
inquiry form